Pinkham’s Grant – NH Fish and Game was contacted by State Police Troop F regarding overdue 70–year-old Christophe Chamley of Cambridge, Massachusetts. Chamley was overdue from a hike in the White Mountains on Sunday.

​When Chamley failed to arrive home, his wife called 911 at 3:48 AM on April 23rd. State Police Troop F started a search for Chamley’s vehicle, locating it at 6:29 AM at the Appalachian Mountain Club (AMC) Pinkham Notch parking area.

​Chamley’s family did not have a hiking itinerary for him and only knew he was hiking in the White Mountains. Chamley also had a medical condition which added to the urgency of the search. Rescue teams from NH Fish and Game Department and Androscoggin Valley Search and Rescue, along with Snow Rangers from the US Forest Service and snowcat operators from the Mount Washington State Park, began rescue operations around 10:00 AM. Rescuers were brought up to the top of Mt. Washington via snowcat and started searching the above tree line trails while other search teams were deployed on trails below tree line and worked up the mountain.

A National Guard helicopter was brought in and started to search from the air. While updating the family on the search missions, I was informed by them they had just spoken with the Mount Washington Hotel and Christophe Chamley had checked in at 1:00 AM on the 23rd. I contacted security at the Mount Washington Hotel and had a state trooper dispatched to confirm this information. After we had confirmed that it was Christophe Chamley, the search was called off. State police took a statement from Chamley while I responded to the Mount Washington Hotel. I arrived at 1:00 PM and interviewed Chamley, who told me he had taken a cab from AMC Pinkham to the Appalachian parking lot on Route 2 in Randolph, leaving there at 7:45 AM. He summited Mt. Adams and Mt. Jefferson, but while on Jefferson he decided to bail off on the westerly side and go down the Caps Ridge Trail to Jefferson Notch Road, then to the Base Road, and down the Base Road to the Mount Washington Hotel, checking in at 1:00 AM.

He told me he decided he couldn’t make his planned route and decided on this course of action, leaving his pack where he could later retrieve it from a road. When he arrived at the hotel, he messengered his wife; however, that did not go through, and he did not confirm that she had received his message. Chamley did not get up the following morning until around 11:00 AM due to being exhausted from his hike the previous day. He was unaware of the search for him. Failure to communicate plans and confirm that loved ones had received his message that he was alright caused the reporting of him as overdue. That, coupled with his age and medical condition, caused an urgent response from Fish and Game when none was needed. 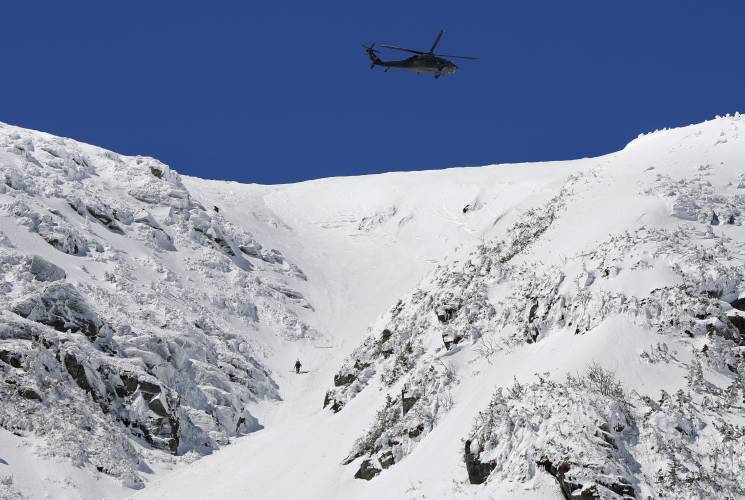 In this Monday, April 23, 2018 photo a National Guard helicopter flies over Mount Washington while searching for missing hiker, 70-year-old Christophe Chamley of Massachusetts. New Hampshire Fish and Game officials are calling a search a waste of time, money and resources after he was found at a luxury hotel. A skier is seen climbing in deep snow on the Left Gully of Tuckerman Ravine. (AP Photo/Robert F. Bukaty)