Like a pencil-chewing stats geek from the world of fantasy baseball, survival guru Robert Koester knows his numbers. Really knows his numbers. Lost-hiker incidents in 2003? Check. Climbing accidents in 2006? Check. Heart attacks, sprained ankles, falls, and bear attacks that resulted in wilderness rescues? He knows them all. That’s because Koester, a 45-year-old from Charlottesville, Virginia, has spent the past seven years creating the International Search and Rescue Database. With 50, 000 documented incidents, it’s the largest, and first, compendium of its kind in the world. But the lifelong hiker isn’t just a collector; like a backcountry actuary, he also analyzes risk. Using his vast database, Koester predicts who will live, who will die, and, most importantly, where lost hikers may be found.

How did you get started?
I’m a search-and-rescue incident commander for the Virginia Department of Emergency Management, and I was running a lot of searches for people with Alzheimer’s. Eventually, I started to develop an intuitive feel for where they’d likely be found, which was about the distance of my thumb on a 1:24, 000 topographic map from the point where they were last seen. So I started recording incidents in Virginia that we could study, and in 2002 I received a grant to collect data from across the United States.

Must’ve been a dream come true.
Yes, I had always wanted to do that research, because the more data you have, the more you can do with it. You can see how hikers lost in the woods behave differently from hikers lost in the desert, discover differences between mountainous and nonmountainous areas, and analyze how someone lost with children behaves compared to someone all by himself. That’s what my recent book, Lost Person Behavior, is about.

So your primary focus is lost hikers?
The database includes all kinds of SAR missions, both frontcountry and backcountry. [The split is 68% wilderness searches, 14% rural, 11% suburban/urban, and 7% water.] But my ultimate goal is actually kind of self-serving. I look for lost people for a living, and I need to know where to look so I can find them as soon as possible. So I analyze where they’re typically found to make future searches that much easier. Each of those stories helps future lost people to be found—so long as someone is collecting that data.

What’s the typical profile of the average lost hiker?
It’s a male—no surprise. The age range is pretty broad, though:
20 to 50 years old. Solo males make up 40 percent of what we see. Overall, people
hiking by themselves account for 58 percent, which is kind of surprising. If
you think about who you pass on the trail, you don’t see that many solo
hikers. But going solo clearly ups your risk of getting lost. The typicals lost
hiker also hasn’t packed any survival equipment. I’m not talking
fancy stuff here, but most don’t even carry the Ten Essentials.

What’s the most common mistake a lost hiker will make?
Most people—especially males—just keep plowing ahead in the direction they were going, in the hope, I guess, that just around the corner they’ll see something they recognize. That rarely happens. The most effective get-found strategy is actually the least used, and that’s backtracking until you know where you are.

Has the rise of GPS usage resulted in fewer SAR calls?
A guarded yes. GPS units are good tools, and they’re getting better every year. But they’re still useless unless you’ve practiced with them. We’ve looked for plenty of people carrying a GPS. If you don’t know what you’re looking at, it’s just lines on a screen.

In what environment do most people get into trouble?
The mountains. I get lots of SAR cases from the West, and a good bit from the East, especially the Northeast. But on the Great Plains, well, not so much. That’s partly because the mountains are where most of the recreational land is, but it’s also because routefinding decisions are more complicated. The most common scenario is an error at a particular decision point, which we think of as a distinct chunk of land where a hiker makes a navigational decision. That could be an intersection of two trails, where someone takes the wrong trail. Or it can be more subtle, like you didn’t notice that your trail branched. Or maybe your decision was to follow a game trail or something that seems like a trail for a while, but isn’t. There are simply more of these decision points in mountainous terrain.

Sounds like we should worry about navigation more than bears.
You definitely should. Most hikers fear the wrong things. People are terrified of spiders, rattlesnakes, bears, and mountain lions, yet your probability of being attacked by an animal is extremely low. There are many bigger dangers out there: a dramatic change in the weather when you’re not prepared for it, or water crossings when you can’t swim or don’t have the skills or equipment to cross safely.

You must see some pretty silly mistakes out there.
A lot of backpackers will discard their gear when they get in trouble. You think: Why on earth did you do that? Wouldn’t a jacket and tent come in pretty handy? They even ditch water, which is essential to your life support system! But they feel they need to lighten their load to go faster because they’re in trouble. It’s absolutely the worst thing you can do.

Name three things hikers should do to make sure they stay found.
First, make reasonable estimates of how much time and effort your hike will require and plan your trip accordingly. Second, carry the Ten Essentials in your pack—even on dayhikes. And third, tell someone exactly where you’re headed and when to expect you back.

Are you safer at home or on the trail?
It’s pretty clear to me that you’re safer out on the trail. Getting to the trailhead is probably the most dangerous part of your whole adventure.

Find out more about Robert Koester and his research at dbs-sar.com. 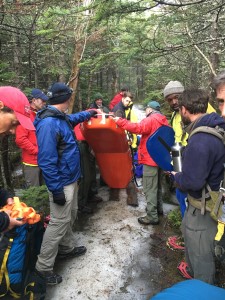